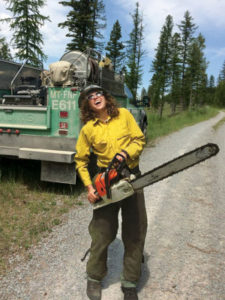 As a young girl growing up in Montana, Clarke watched fires scorch the landscape each summer. She wanted to understand the decisions firefighters make on the ground—when to fight a fire and when to let it burn. For Clarke, a former cross-country runner, her stamina was never in question.

“My captain was a patient mentor and answered my questions about what we were doing and why,” says Clarke, who is enrolled in an interdisciplinary systems ecology master’s program at the University of Montana. “I’ll definitely be going back this summer.”

Clarke is a 2015 graduate of Lewis & Clark College. She began research on the life cycle of morel mushrooms, which rise up through the ashes of forest fires, after receiving Lewis & Clark’s President’s Scholarship for Student Engagement. She’s held prestigious research positions with Harvard Forest and the Smithsonian Institute, worked as a guest scientist for the Helmholtz Centre for Environmental Research in Germany, traveled to Nepal on a Fulbright Research Scholarship, and worked as a photojournalist for the Wilderness Society.

Her studies began in a one-room schoolhouse in Condon, a northwestern Montana town that was then home to 310 people. Frequent forest fires, she says, sometimes bonded the small community but often tore it apart. “The only things that brought people together, regardless of their background, were the mushrooms,” says Clarke. “They symbolized renewal and were wonderful to eat.”

When it came time to choose a college, she headed to Lewis & Clark based on “a healthy financial aid package” and its “prestigious science programs known for promoting interdisciplinary learning.” Clarke originally wanted to be a doctor, so she took premed courses and also studied ecology. “I was a biology major, but Lewis & Clark didn’t force me to choose just one focus.” She also dabbled in anthropology, poetry, music, and French.

She was looking for an independent research project when Assistant Professor of Biology Peter Kennedy gave her a USDA book on morel mushrooms. Her subsequent research on the mycorrhizal properties of morels earned her a President’s Scholarship during her sophomore year. Mycorrhizal fungi form associations with plant roots that can be beneficial to both the plant and fungi. When Kennedy left the college, Assistant Professor of Biology Margaret Metz became her advisor and helped direct her research.

Later, on a Fulbright Scholarship in Nepal, Clarke studied Nepalese perceptions of wild mushrooms from an ethnoecological perspective—meaning how people perceive and manipulate their environments. She learned that mushrooms are valued as food and medicine and also provide many with a lucrative income. Asking about perceptions on wild and cultivated mushrooms gave her an intimate perspective on health, education, and migration in Nepal. “The time I spent connecting with each community was the most personally impactful experience of my Fulbright research.”

In the future, Clarke may pursue a PhD, but for now, she is content to explore and grow. “I’m very interested in connecting with people and learning about what brings meaning to their lives.”

This article was written by Pattie Pace and originally published in the Winter 2019 issue of Lewis & Clark’s The Chronicle Magazine.  It has been republished here with permission.