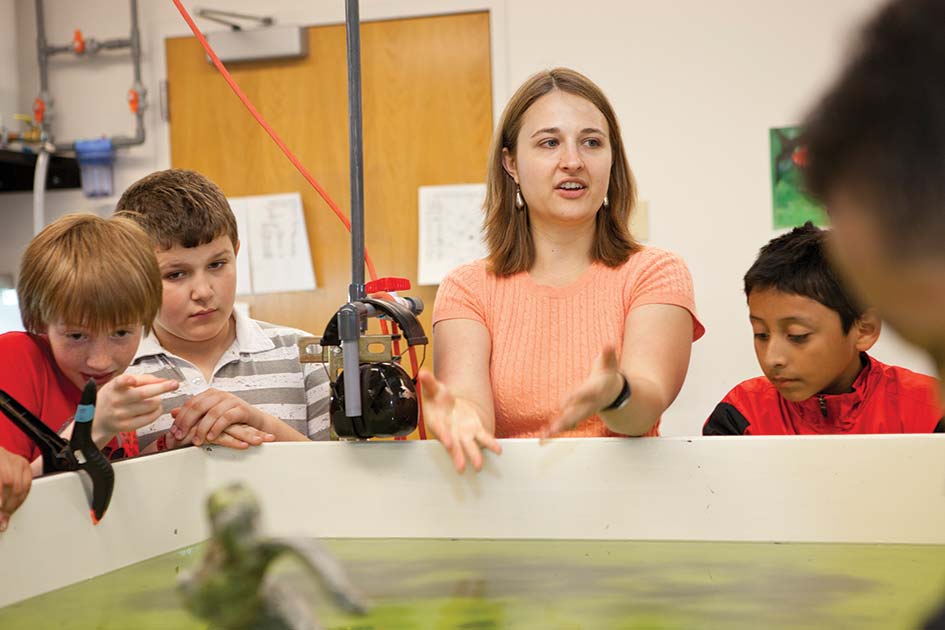 “Are we going swimming?”

Ms. Liao’s fourth- grade class from Grout Elementary traipse behind the Reed student team leading them down a rocky embankment to the Willamette River on a brisk, bright fall day.

The 21 Grout students have come out to the river to conduct experiments under the watchful eyes of the Reedies. Their findings should help them decide whether to release the chinook salmon fry they have been raising in classroom tanks since the fish were tiny orange-red eggs.

Their field trip marks the culmination of the fall term for Reed’s Science Outreach program. Launched more than 20 years ago, the program dispatches Reed students to deliver hands-on science lessons to public elementary and middle schools in Portland. 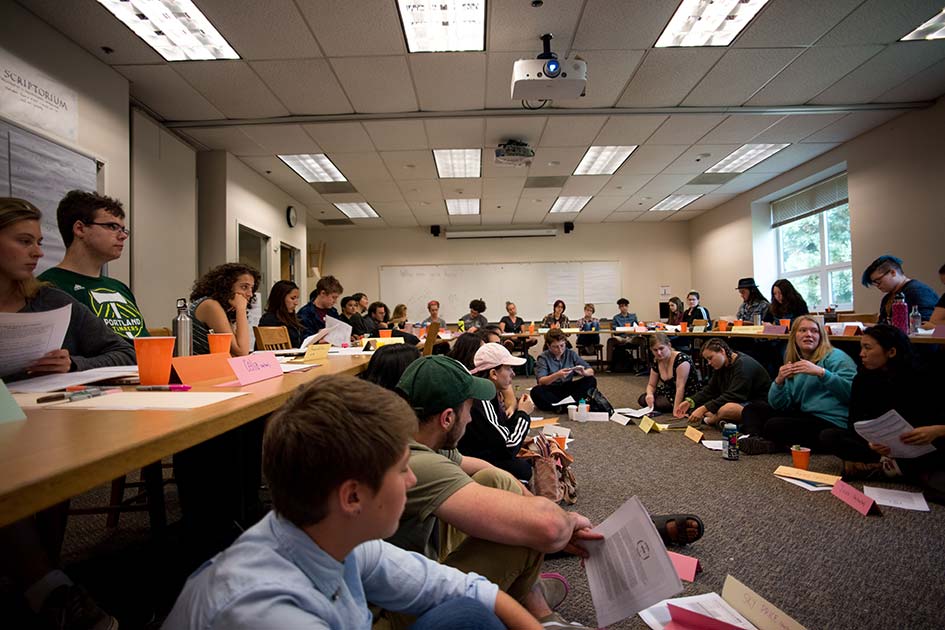 We try to get the kids to think like scientists. We teach them about the scientific method—how even when they’re describing the color of something, they’re making a valid scientific observation. I don’t feel I’m that far from 4th grade. I relate to them, and they’re awesome.

The Science Outreach program brings science inspiration to some 500 students at seven schools every semester, most of them at schools with high numbers of low-income children. At Grout, for example, more than 40% of students are considered economically disadvantaged.

The children get to do science, but the experience can be just as meaningful for the Reedies.

This program has definitely diverted Reed students into teaching careers. We’re able to give something to the community, and at the same time provide a well-thought-out service learning opportunity for undergraduates to share their knowledge and passion for science.

Like the salmon, the outreach program has grown considerably since it was spawned back in 1996 by Prof. Bob Kaplan [biology 1983–2015]. At first the program served as a way to fulfill community outreach requirements for science research grants. But Kaplan was a tireless advocate for the program, which is now directly funded by the college.

Reed students run through a rigorous application process to be selected to work in the program. Last year the office reviewed 90 applicants for 20 spots. Once hired, the students undergo extensive training on curriculum, instructional techniques, and behavior management.

First-year student Mayou Roffe ’21 is one of those Reedies inspired to consider a career in teaching after working in the program. She is part of a team assigned to Pioneer Special School, a public alternative school for students with serious emotional and social challenges.

“These kids are brilliant, and with them not everything has to be perfect and precious and every edge doesn’t have to be straight,” says Roffe, adding she was previously “staunchly against” becoming a teacher, but now is open to the notion. “There’s just something about seeing a kid who is quiet and shy at first get that spark—almost like they’re coming to life.”

The outreach program’s curriculum, covering a cross-disciplinary array of subjects, is designed with faculty input and based on national academic standards. The fall unit, for example, focuses on salmon as students learn about life cycles and habitats while raising salmon in their classrooms. Other units cover topics in biology, chemistry, physics, and earth science.

The theme that ties everything together is discovery. The lessons are built around interactive class activities and experiments. The goal is to make science fun, whether the students are mixing chemicals in test tubes or observing an earthquake simulator in action.

Prof. Kara Cerveny [biology 2012–] has been the program’s faculty advisor since 2014, when she was tapped by Kaplan before his retirement. A middle and high school teacher before earning her doctorate, she says the program meets a need in science education. In a world of “alternative facts,” she adds, scientists have a duty to educate the next generation.

Today’s elementary school teachers are expected to do a lot just teaching students how to read and write and build math skills, and science sometimes gets short shrift. Young children are natural scientists, but along the way they come to think that science is about memorizing facts. What we are trying to do with the outreach program is harness their curiosity and inquisitiveness to get them excited about actually doing science.

“The kids’ questions can be very unexpected, and they ask them in ways that show the way they’re thinking,” says Mary Snook ’19, an environmental studies/biology major and the lead of the Grout team. “They ask very smart questions in ways college students would never ask.”

Back at the Willamette River, the Grout students are getting excited. With the guidance of the Reed students, they have conducted tests on river conditions, determining that the water pH level (7) and temperature (45˚) are suitably safe and cold for the salmon. They have carefully worked through the steps of the scientific method: making observations, asking questions, forming hypotheses, conducting experiments, analyzing the data, and developing conclusions.

“The Reed students do a great job of exposing the kids to new ideas,” says their teacher, Karen Liao. “My greatest hope is that they see science as cool and see themselves as scientists.”

Finally the moment the children have been working toward for several months has arrived. Presence O’Neal claps her hands to get everyone’s attention:  “So do we release the salmon?”

A girl in an elf hat raises her hand to speak. “I don’t want to. I want to keep them longer.”

The class answers some more questions about riparian zones and the relationship between water temperature and oxygenation before everyone agrees that, yes, this is the right time and place to release their salmon.  Biology major Aurora Solla ’19 opens three plastic bags to release a couple hundred tiny, wriggling fry no more than a half centimeter in length.

Solla explains that the biggest chinook on record measured 5 feet and more than 100 pounds, adding, “If we’re really lucky, some of these fish might get that big.”

The children stand silently at the water’s edge, watching their fry bob in the gentle ebb and flow of the tide. Finally one of them calls out what many may be thinking: “Goodbye! We love you!”

Find out more about Science Outreach.

To learn more about the Reed news and stories, visit reed.edu/reed-magazine/